Wisdom of Solomon is a worker placement game with a basis in religion. The board is divided into two sides. The left side of the board holds the market where resources can be purchased. There is also an area for trading, building the Temple of Solomon, purchasing new buildings, and claiming Holy Place bonuses. The right side of the board is the Land of Israel. Each location in the land, produces a different type of resource. Players build Custom Houses in the lands to spread Solomon’s influence.

Wisdom of Solomon is played over a series of years. Each player works as a governor for Solomon, in which they must gather resources, build structures and expand Solomon’s influence throughout the kingdom. Players work to earn the most favor over the course of the game. The number of workers per player varies with the number of players in the game, 2 players 6 workers, 3 players 5 workers, 4 and 5 players 4 workers. On a turn, a player puts their worker on the board in a desired location or on an owned building card. The action is then carried out which can range from earning resources, gaining favor or various other things. After each player has used all of their workers, the year ends and the board is reset for another year by collecting workers, and adjusting available resources and buildings. Another year is played until the end game year is triggered by one player placing all of their Custom Houses on the map or Solomon’s Temple has been completed. The player that earns the most favor claims victory and is honored by King Solomon. 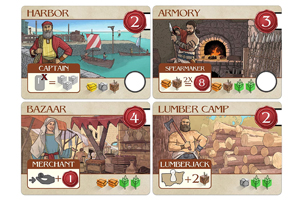 We enjoyed the mechanics of Wisdom of Solomon. The board was interesting with two different sides, the market and such one side and the Land of Israel on the other. We found it interesting how the two sides worked off of each other. Worker placement games are one of our all time favorite mechanics. While we did love the mechanics, the theme was a bit religious for our taste. The religious aspect can be ignored throughout the game if desired but it was very prevalent over the course of the game. I don’t feel this should be considered a negative, it just was a bit more than we expected in the game. We would recommend this game if you enjoy worker placement games and don’t mind a religious undertone throughout the game. The rule book was well laid out and clearly understood. The theme carried strongly throughout the game and is sure to be enjoyed by those that play!