This site contains affiliate links to products. We may receive a commission for purchases made through these links.

Who does not want to go back in time or have a peek at the future? The concept of time travel has always attracted people, and for this reason, you may find many movies, tv plays, and video games on the concept of turning the clock backward or forward. Similarly, the idea of time travel board games is a great addition to the expanding family of board games. 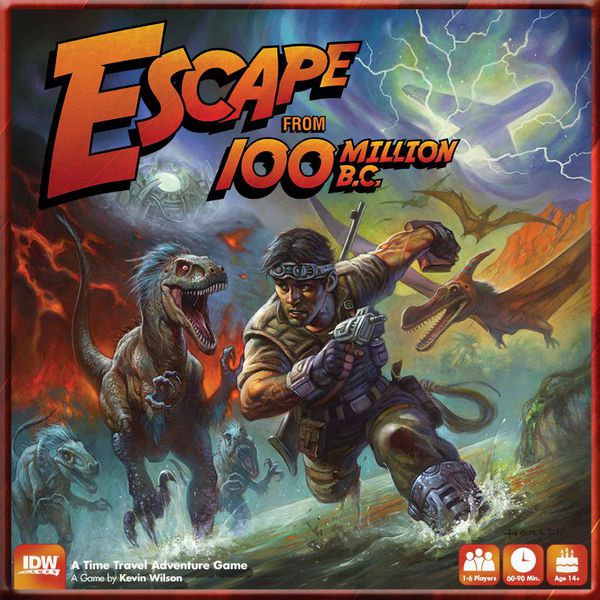 The Escape From 100 Million B.C. takes you on an adventure ride to an era that was marked by dinosaurs. The game is about certain characters (played by 1 to 6 players) who went on the world’s first time-travel adventure but crash-landed on the top of a volcano where they are now stuck. As one of the players, you want to put the time machine back in action to travel to your present life, before the volcano erupts. Since each character that the player is portraying is different from the other one, every player feels unique and special, and this concept stands out from many generic board games.

Each player needs to uncover the missing parts of the time-machine; he/ she does this by moving to every area on the board and flipping the tiles. If a player is lucky, he/ she may get a piece of equipment or a part of the time-machine, or, the player may end up facing a dinosaur (you do not want to harm them though). The game board is esthetically designed and divided into five different areas that the players can explore: mountains, ocean, jungle, swamp, and flatland. Since it is a cooperative game, if the volcano erupts, everyone dies and hence loses the game.

The Escape From 100 Million B.C. may take you back in time, but time flies when you are playing the game. An average board game session is about 90 minutes long and every second is guaranteed fun and humor. Some people may find this game too much dependent on luck (for instance: when you have sixes in a row or draw the right tile at the right time) which could be off-putting to some board game geeks. For the rest, it guarantees to make your time enjoyable, and that’s what the purpose of a good game is. 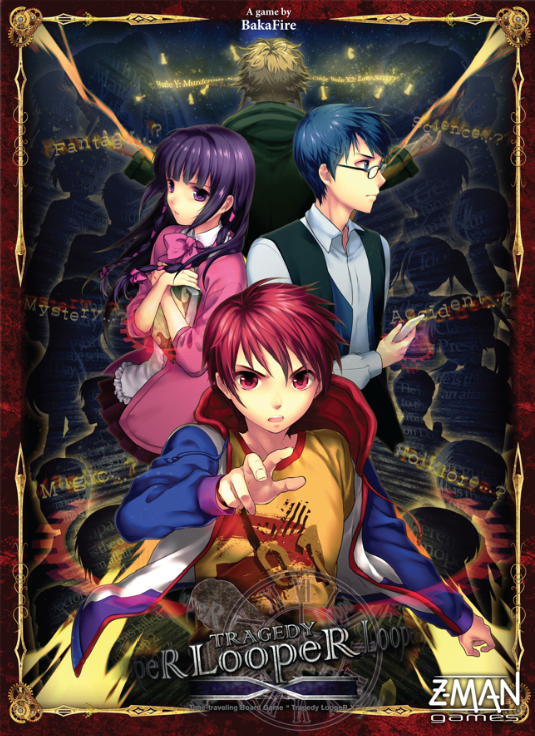 Who does not love a theme about solving a crime mystery and putting the culprit behind bars? Well, guess what, the Tragedy Looper board game does more than this. In this game, you cannot just stop the crime, you can prevent it from happening in the first place. How cool is that!

In Tragedy Looper, the players are the time-traveling protagonists who enter a cycle of time-loops to find all the required details about a certain crime and prevent it from happening. The only obstacle that stops them from doing so successfully is the fourth player – the devious Mastermind – who will do everything to make the protagonists stop and lose the case. The three protagonists have a limited number of loops to figure out who is causing the issue and what the crime is that they must prevent from occurring to win the game, and then do everything to make it stop. The Mastermind, however, needs to do everything he/ she can to make the crime happen.

Tragedy Looper is one of a kind cooperative board game. It is fun, challenging, exciting, and engaging – everything we look in a good board game to play with a group of friends or family. It is designed for 2 to 4 players (13 years or more) with every session time to be around 2 hours. A downside of the game could be that at many places there is an overload of information that could be challenging for a new player to learn, or to teach. But looking at how engaging this board game is, that should not be an issue. 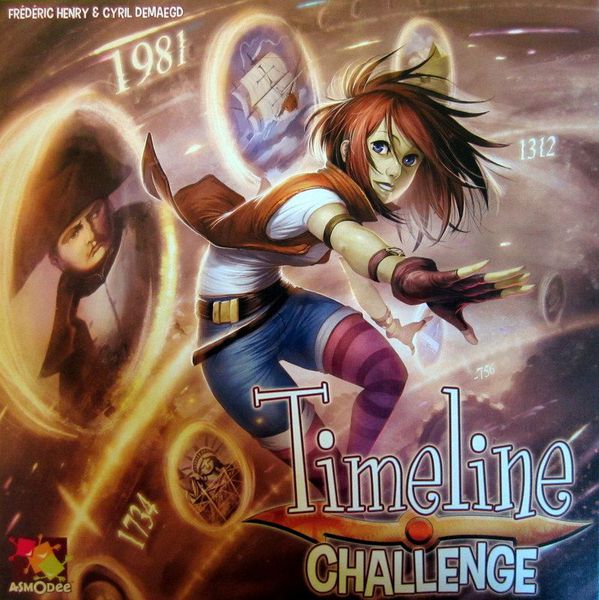 If you have a group of 10 people and have no idea what to do, try playing the Timeline Challenge. The board game is based on actual events and is designed for 2 to 10 players, though it is the most interesting when played by four players. Timeline Challenge can be finished in half an hour and has an age recommendation of 10 years or more. However, older individuals will have an edge over others due to the historical knowledge that the game covers.

The Timeline Challenge is based on 110 cards. Each of these cards has a historical event, invention or discovery on both its sides along with a definitive date (on which the event occurred) at only one side. You need to move around a circular board, and you can do so only when you complete the challenges correctly. There are various trials involved, and whoever goes the farthest by earning the maximum points wins the game.

The rules of the game are easy to follow, which makes its setup a breeze. You do not have to waste hours in explaining the rules. It can be a great party game as it caters to a larger number of people. If you remove the insert of the box, you can store all your Timeline games. And that’s one of the great things about this game: you can play it with any of the Timeline cards and can mix them all as well. This option is great as after a while the game can get repetitive. Adding more cards will keep it interesting.

However, if you are one of those people who do not like trivia, then you may find the board game boring. And with older players getting an edge over the younger lot, many kids may give this game a pass as well. But don’t worry, you do not have to be a hardcore history buff to win this game. The game has a catch-up mechanism which can be a good as well as a bad thing. If you are lagging, the catch-up mechanism can help you make up for your loss, but this may be a little upsetting for players who used their strategy to move ahead. Having said that, if you are fond of the Timeline game series, you will love this board game too.

Adventurers: The Temple of Chac If you are looking for a time travel adventure game that can be enjoyed by kids and adults alike, this game could be the one for you. Adventurers: The Temple of Chac from Fantasy Flight Games is around 45 minutes of non-stop fun and is played between 2 to 6 players.

The board game takes you back in the ancient times where you will enjoy an Indiana Jones-style robbery. It revolves around a fast-paced run through the Temple of Chac – the Mayan rain god. You will be over-turning deadly traps and risking your life while you try to exit the temple, and before you do, you may want to carry as much treasure as you can. If your character dies, a second character can be dropped in and you may still get enough treasure to win.

This board game depends on luck a lot, so if you are one of those people who do not find any trace of luck when you roll a dice or have a lucky draw for treasure, you may feel frustrated. There is, however, some decision-making skills involved in the game. The possible risks that you can face could be interesting for adults, however, the game will attract younger audiences for sure. It is no doubt a great family-board game for time travel and adventure buffs. Anachrony is a competitive time-travel board game about the worker placement genre. You can either play it solo or enjoy it with up to 4 players. Its session time is from 30 to 120 minutes depending upon the number of players playing the game. Each player will add 30 minutes to the game, so the more the players are, the longer will be the game time.

Like many time-travel board games, the storyline of Anachromy is also a bit complex but once you get the hang of it, you will play it like a pro. The game is about the distant future when the earth is hit by an enormous meteorite that caused a massive explosion and almost destroyed the planet – almost. There are a small number of survivors who started to follow one of the four radical ideologies, referred to as Paths, to rebuild the destroyed planet. These four ideological groups were: Harmony, Progress, Dominance, and Salvation. The followers of these paths live in isolation from each group, and they can only meet in the last city left on the planet known as the Capital. Each player represents an ideological group.

Among the debris, these groups found a rare metal called Neutronium that could be used in time traveling. Using Neutronium the survivors will have to warn their ancestors about the meteorite. The players, representing an ideological path each, are competing for resources where only one of them can win. To win you need to score points in a few ways, like building your base facilities, gathering the supplies needed to evacuate when the meteorite hits, increasing your morale, and time traveling. The player who has the most victory points at the end of the game wins.

Some players may initially find it a little overwhelming as it requires several systems and mechanics to learn. Also, it is an expensive game as it doesn’t look complete without the Exosuit expansion, which is an extra cost. However, if you ignore these downsides, Anachrony is an excellent example of the worker placement genre. The single-player mode, referred to as Chronobot, challenges you to play with you when no other person is! If you like board games where players don’t need to directly conflict with each other, you may love this one too.

Not every time-travel board game is worth your time. The games that have an interesting storyline, visually appealing characters, good quality game components, and are worth every dollar you paid for, are the ones you should always go for. So, from the time travel board games listed above, which one is going to be your favorite? You will have to play all of them to find out!